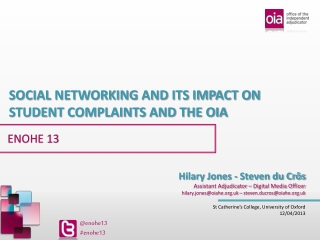 @enohe13 #enohe13 - . social networking. “we don’t have a choice on whether we do social media, the question is how

Digital Citizenship in the Classroom - . what does this mean and how do we deal with it?. this is the digital

Digital Communication includes… - . think before you send!. cell phones, computers, and any other devices with access

Social networking and other digital media as a tool for teaching and learning about diversity - . lillian vega

The Use of Digital Corpora in Foreign Language instruction - . recent developments in technological tools for the purpose