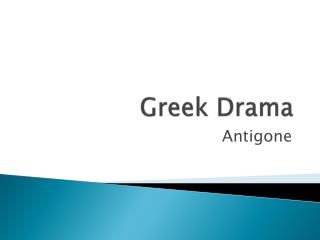 Greek Drama. Antigone. The Greek Theater. 5 th Century BC Golden Age of Drama Dramatic festivals were popular People watched tragic and comic plays This period referred to as the Age of Pericles This Golden Age ended with the start of the Peloponnesian War. Drama – roots in poetry.

Greek Drama - . oedipus rex and antigone by sophocles. the beginnings of drama. began as a part of an athenian religious

Greek Drama - . dithyrambs: sung by a greek chorus of up to 50 men or boys dancing in circular formation would normally

Greek Drama - . greek drama is a theatrical tradition that flourished in ancient greece between c. 550 and c. 220 bce.

Greek Drama - . tragic hero. a character, usually of high birth, neither totally good or bad, whose downfall is brought

Greek Drama - . the essentials to understanding and appreciating medea . ceremonious. humans have always been ceremonious

Greek Drama - . the origins of roman drama. this project is available at: v:motesjworld humanities greek theatre (on the