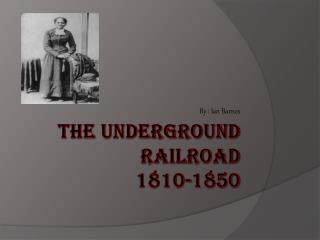 By : Ian Barnes. THE UNDERGROUND RAILROAD 1810-1850. Important People Of The Railroad. Harriet Tubman- Escorted over 300 slaves to freedom and took 19 trips to slave plantations.

Traveling the Underground Railroad - . mapping it out.

The Rise of Realism: 1850-1900 - . “the only reason for the existence of a novel is that it does attempt to represent

Henry’s Freedom Box - . retold by; amaris v. hennry 's freedom box. henry's life. henry did not know how old he was and

Underground Railroad - . by: shane owens. conductors. a conductor is a person who helped out on the underground railroad

American Evolution 1830-1850 - . a study of reform movements and the growth of the united states. push factors: political