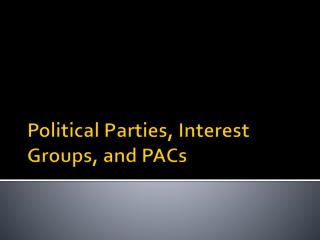 Political Parties, Interest Groups, and PACs. The Concepts. These are the questions you need to be able to answer on the test! Check. What? Why? Who? How? Effects?. What coalitions make up the two main political parties in the United States? Chapter 10- Interest Groups - . (1). define what an interest group is, and contrast its functions with political parties

Objective: Examine and understand the differing types and functions of Interest Groups - January 17, 2019 ap us govt

Political Parties in Canada - . parties, the media and other influences on the canadian electoral system. political

Special Interest Groups - . what is an interest group. a private organization that tries to persuade public officials to