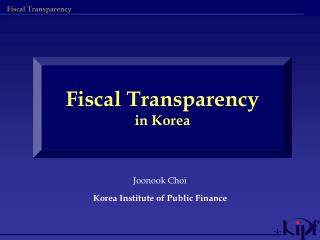 Fiscal Transparency in Korea. Joonook Choi. Korea Institute of Public Finance. 0. Background. Realizing the Importance of transparency in the economic system during the 1990s. Lack of transparency as causes of several problems Preparing for Accession to OECD (1996) Transparency in Discovery: - . issues and progress in the ecosystem of index-based discovery. marshall breeding

Transparency in Governance - . nothing is safe that does not show that it can bear discussion and publicity. governance.