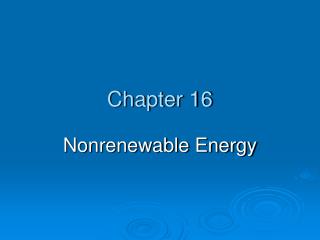 Chapter 16. Nonrenewable Energy. Core Case Study: How Long Will the Oil Party Last?. Saudi Arabia could supply the world with oil for about 10 years. The Alaska’s North Slope could meet the world oil demand for 6 months (U.S.: 3 years).