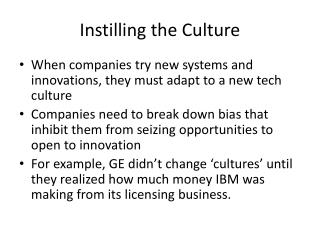 Instilling the Culture. When companies try new systems and innovations, they must adapt to a new tech culture Companies need to break down bias that inhibit them from seizing opportunities to open to innovation Executing the Strategy: Building a Capable Organization and Instilling a Culture - Chapter 8. executing the strategy:

The Beta Culture - . this simulation has been modified from the original version. prepared by: jennifer robertson,