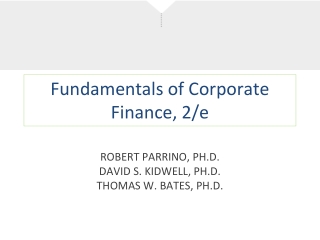 Corporate Finance - . objectives of the course . on successful completion of this course, you should be able to: identify

APPLIED CORPORATE FINANCE - . aswath damodaran www.damodaran.com. what is corporate finance?. every decision that a

Corporate Finance - . some important questions that are answered using finance what long-term investments should the firm