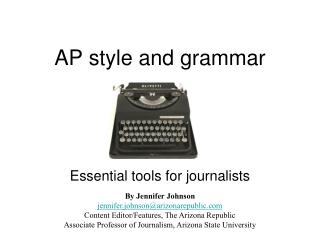 Hitchhiker’s Guide to Grammar - . punctuation part i: commas. what to learn. objectives: 1. students will understand

Grammar as Rhetoric and Style - . parallel structures. generally:. sentences or parts of a sentence are parallel when

AP Style Review - . there’s no point in trying to memorize the ap stylebook. get in the habit of using it whenever you