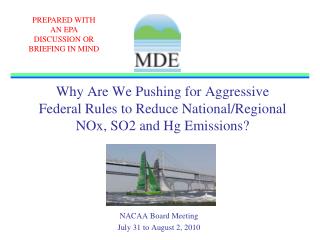 PREPARED WITH AN EPA DISCUSSION OR BRIEFING IN MIND. Why Are We Pushing for Aggressive Federal Rules to Reduce National/Regional NOx, SO2 and Hg Emissions?. NACAA Board Meeting July 31 to August 2, 2010. Six Highest Priority Categories. Multi-Pollutant Sector-Based Controls. Tuesday, August 31, 2010 - . bellwork : take a few minutes to review your definitions. if you have anything to listen to,