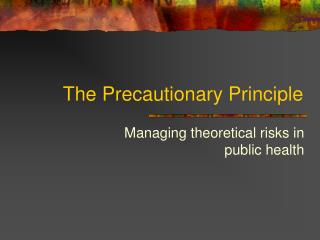 The Precautionary Principle. Managing theoretical risks in public health. Policy Problem. The blood system is confronted with the potential new infectious threat from vCJD Must take measures to protect against this theoretical risk

Original Divine Principle - . why we study the original divine principle. i. reasons to study the unification principle.

Recognition or Perception of the Oneness of Humanity is the Principle underlying World Citizenship - . “…the concept

Structure fabrication techniques and possibilities - . m.taborelli. disk structures quadrant structures ….most of it

Habits of Mind: An organizing principle for mathematics curriculum and instruction - Michelle manes department of

The Price of Precaution and the Ethics of Risk - . christian munthe department of philosophy, göteborg university based