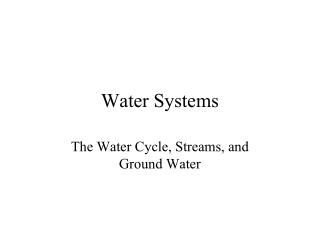 Water Systems - . introduction personal water usage. where does water come from?. where do you think water comes

Water Systems - . so what do people do with water?. did you know that canada is one of the highest water users per capita

Water Systems: Water and Weather - . grade 8 science warden ave ps. learning goals. by the end of this presentation we

Water Filtration Systems - When you try to tackle the subject of water filters, you can find a lot of information about

Chilled Water Systems - Are used not only in big industries but also in small ones. coltfreeze offers a wide range of

Water Treatment Systems - At water treatment services our mission is to provide the best in chemical products, customer