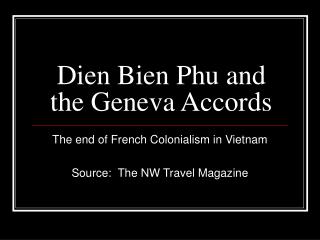 Dien Bien Phu and the Geneva Accords. The end of French Colonialism in Vietnam Source: The NW Travel Magazine. The Battle of Dienbienphu. The final battle between the French forces and the North Viet Minh Communist revolutionary forces.

Oslo Accords - . the “epic fail” of peace treaties. the oslo accords treaty- created to settle the difference between

Vietnam – a French Colony - . france, after ruling vietnam for over 100 years was defeated by gen. vo nguyen giap at

Vietnam – a French Colony no more - . france, after ruling vietnam or over 100 years was defeated by gen. giap at

The Vietnam War - . learning targets. explain how the u.s. got involved in the vietnam war. compare and contrast the u.s.

Carter and the Camp David Accords: - . is the juice worth the squeeze?. camp david. camp david accords: the greeting.

Bicycles and Uniforms - . ritesh vallabhaneni. bicycles. - vietnamese had to use bicycle infantry. the bicycles enabled

COS Standard 13 - Trace the course of the involvement of the united states in vietnam from the 1950s to 1975, including

Dien Bien Phu and the Geneva Accords - . the end of french colonialism in vietnam source: the nw travel magazine. the

Answer the following - . what is my event/ who is my person? what role did they/it play in the vietnam war? how did

Vietnam War - . essential questions. was it possible for the united states to have definitively won the vietnam war? what