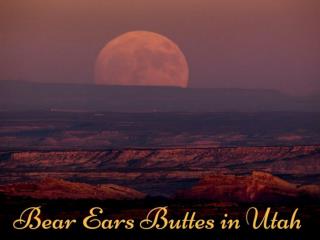 Known as Bear Ears for the pair of purple buttes at the region’s center, the newly proclaimed 1.9 million-acre National Monument will preserve a photographer’s checklist of high-desert drama: spires, bridges, canyons. Yet the region’s true distinction is not its topography, but its cultural significance; perhaps no place in America is as rich with ancient Native American sites as Bear Ears. In October 2015, a coalition of five Indian nations, including the Hopi, Ute, and Navajo, formally proposed the monument, attempting to preserve the parcel’s 100,000 archeological sites from ongoing looting and grave robbing. Last June, in a letter to President Obama, more than 700 archeologists endorsed the proposal, saying that looting of the area’s many ancient kivas and dwellings was continuing “at an alarming pace” and calling Bear Ears “America’s most significant unprotected cultural landscape.” President Obama designated Bear Ears Butte and Gold Buttes in Nevada as protected National monuments at the end of last month. The incoming Trump administration, along with the Republican-controlled congress, and Utah state officials, could mount a legal challenge against that designation.

Latinos in Utah - . 1. what country did utah belong to before 1848?. true or false. 2. latinos in utah were not affected

Adventures in Utah - . basically this will be a picture slideshow of some random utah pictures i had lying around. my

HUNGER IN UTAH - . make a difference in your community project by “santa’s helpers ”. hunger statistics. 1 in 10

Conflict in Utah - . the utah war. utah territory. u.s. government appointed half of the government posts in utah. most

Immigration in Utah - . a sequence of events. assignment. as i read the captions to you, look at the pictures. pay

EARS TO EARS - . a presentation by jyothi singh. wide ears of elephant like fans. ears in the shape of leaves . sharp and

Senses- Ears - . hearing and balance are the main functions of hearing. hearing works with the other 4 senses to aid us

Rabbit Ears - . picking up the “extras” signal for your television shows. problem. people use more than one device to

Menan Buttes - . the north menan butte as seen from westbound main st. (hwy 33). notice the difference between images a