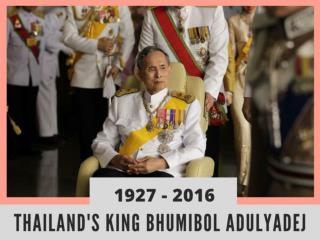 Thailand's King Bhumibol Adulyadej, the world's longest-reigning monarch, has died at the age of 88, said a palace statement.

Thailand - . annabel jeffery 6v. customs. bow your head as if in prayer your hands adjust to the persons standard you are

S usie King Taylor - . report by charlotte. birth. she was born on august 6, 1848. death. she died in boston on october

Thailand - . by: b. studious and d. o. yerwork. history - kingdom of siam. military leaders forced the government to

Timeline of 1927 Flood - . create a timeline that indicates the climatic conditions and the sequence of physical

“For King and Country”: The yellow shirts of Thailand - . the 11 th international conference on thai studies siam