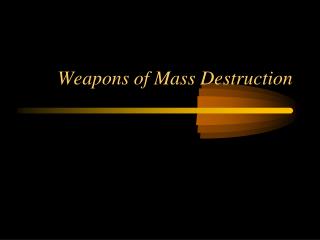 Anglo-Saxon Weapons and Armor - . by bo echols. the spear. t he main weapon of the period the spear was used by warriors

As A Community We Face Many Types of Disasters…… - . weapons of mass destruction. cbrne chemical biological

US Counterterrorism Strategy - . national strategy for homeland security july 2002 national security strategy of the us ,