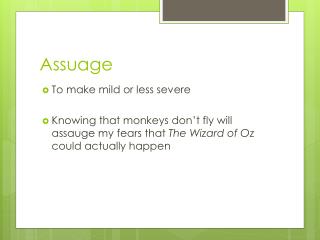 Assuage. To make mild or less severe Knowing that monkeys don’t fly will assauge my fears that The Wizard of Oz could actually happen. Amble. To go at a slow easy pace; stroll. We ambled across the parking lot o n our way to the store. Condescend.