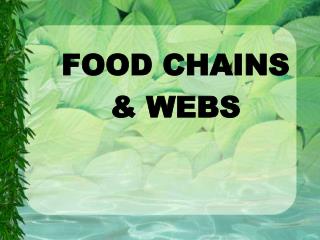 All fungi - . make their food. absorb their food. produce mushrooms. have chlorophyll. fungi do not. carry on

ADVANCED . fst - . food safety training in canada for food handlers. based on the canadian food retail and food services

VALUE CHAINS - . chapter 2. david a. collier and james r. evans. 2-1 explain the concept of value and how it can be

Mono Lake Food Webs - . investigation 4. what are ecosystems?. an ecosystem is the interaction between the biotic and

&quot;Man is born free but everywhere is in chains.&quot; - . deism. tolerance. progress. “dare to know”.