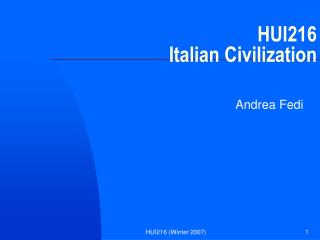 HUI216 Italian Civilization. Andrea Fedi. 0.1 The class Web site. http://www.campo7.com/hui216w What you will find there announcements and assignments a detailed calendar an outline and notes for each lecture many of the required readings the syllabus Great Mosque of Cordoba (Spain) - ISLAMIC Once one of the biggest mosques in the World, it’s now a Catholic Cathedral

Foundations of Western Civilization: Greece and Rome - . why start here?. our civilization stretches back nearly 3,000

The Italian Renaissance - . chapter 1 section 1. a rebirth?. a new age had dawned in western europe, given expression by

US Drill Unit I - . chapter 1. the first empire to emerge in the americas was. the olmec. believed to be the first

Western Civilization - . chapter 5. origins. rome, as a dominant force in the mediterranean, owed much to both

The Huang Ho Valley - . main idea- the shang civilization developed as a civilization along the yellow river.

The Beginnings of Civilization - . 3,700,000 to 587 b.c. exploration of prehistory. hominids www.houseofcanes.com/