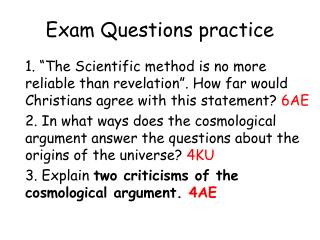 Exam Questions practice. 1. “The Scientific method is no more reliable than revelation ”. How far would Christians agree with this statement ? 6AE 2. In what ways does the cosmological argument answer the questions about the origins of the universe ? 4KU

Cams Exam Questions - Get acams exam questions with 100% passing assurance and money back guarantee. we provide you cams

ACAMS Questions Answers - If you are worried about your acams cams exam and you are not prepared so, now you donâ€™t

Cima F3 Exam Questions - If you are worried about your cima f3 exam and you are not prepared so, now you donâ€™t

Practice Questions - . review for ap exam. the franking privilege is best described as a request by the president for a

PSYC-465 practice test - . exam 3: research methods and vision warning: the following questions may have more than one

Practice Exam - . questions 1-5 are based on the following