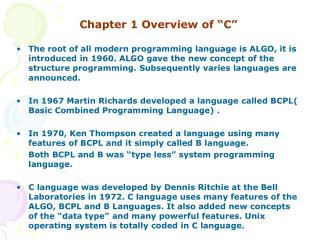 Chapter 1 Overview of “C” The root of all modern programming language is ALGO, it is introduced in 1960. ALGO gave the new concept of the structure programming. Subsequently varies languages are announced. Chapter 4 Overview - . the dcm is very complex mechanical, electrical, hydraulic and safety systems all work together

Chapter 13: Advanced Laptops and Portable Devices - . it essentials: pc hardware and software v4.0. purpose of this

OVERVIEW OF CHAPTER 40B FUNDAMENTALS - . the next chapter of 40b: a training on the latest developments in the affordable

Overview of Scuba Diving - . introduction. the members of blue group lily, james, malik , and makena present to you a

CHAPTER 4 - . functions of the fed. chapter 4 overview. this chapter will: a. identify the key components of the fed

Chapter 3: z/OS Overview - . chapter objectives. be able to: give examples of how z/os differs from a single-user