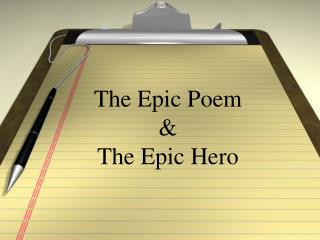 The Epic Poem & The Epic Hero. Epic Definition. An epic is a long narrative poem that relates the great deeds of a larger-than-life hero who embodies the values of a particular society. Epics often…. Concern eternal human problems such as the conflict between GOOD and EVIL The Faerie Queene - . edmund spenser. the faerie queene. spenser considered “ heroical ” or epic poetry to be the

Poem at Thirty-Nine - . themes of the poem. walker’s relationship with her father. semi-autobiographical piece about

Lesson 14 - . argentia bay by herman wouk. background about the author. herman wouk (1915- ) is an american novelist. he

THE AMAZING RACE ATHENS - . democracy in ancient greece . welcome to the amazing race. today is the start of an epic

The Greeks - . chapter 4 review. bronze-using peoples who lived on crete. who are minoans?. body of water that greeks

The Eight Stages of the Epic Hero’s Journey - . a.k.a. your journey. why study the hero’s journey?. it is the pattern