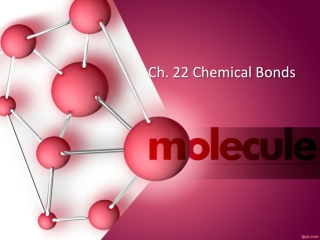 Ch. 22 Chemical Bonds. What is a Chemical Formula?. When elements combine to form compounds a chemical reaction occurs creating a new compound with properties that are different from the original elements. Ch 22 Chemical Bonds - . tuesday 10.7.14. stability. some elements combine chemically and no longer have the same

Chemical Bonds - . atoms gain or lose electrons through chemical reactions to gain a filled outer shell and therefore a

Chemical Bonds - . an electrical attraction between two oppositely charged atoms or groups of atoms. happens when an atom