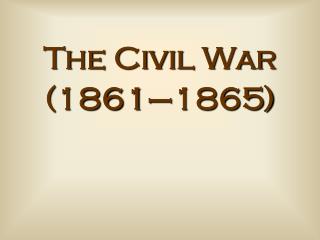 The Civil War (1861–1865). Fort Sumter. With Lincoln in office and all hope of compromise extinguished, the Confederate president and Confederate Congress authorized an army and navy and set about taking control of federal civil and military installation in the South. The Furnace of Civil War 1861-1865 - . at the beginning of the war lincoln quick military action to show the folly to the

The Reconstruction Period - . 1865-1877. important questions . if preserving the union was lincoln’s war aim, then what