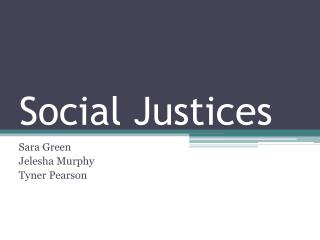 Social Justices. Sara Green Jelesha Murphy Tyner Pearson. Reconstruction (1865-1877). What was Reconstruction?. “The Reconstruction Period was the period after the American Civil War when the southern states were reorganized and reintegrated into the union. 1865-1877”. Judges &amp; Justices - . psci 2481. quiz. who is the president of the united states? who is the chief justice of the

Selecting the Justices - . presidents believe supreme court justices are among the most important nominations they make

Judges &amp; Justices - . psci 2481. questions. who is the president of the united states? who is the chief justice

JUSTICES OF THE PEACE - These were not paid for their service, they volunteered. chief local government officers,

Justices of the Supreme Court - . opps! they aren’t the justices! that’s mrs. stephanow and her group at the supreme

The Justices of the Supreme Court - . lib·er·al –adjective 1. favorable to progress or reform, as in political or

Chief Justices of the United States - . those who left the biggest imprint on constitutional interpretation. john