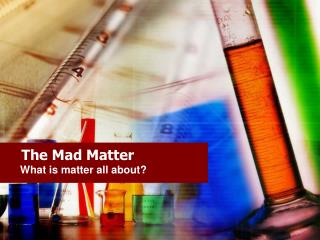 The Mad Matter. What is matter all about?. Matter . Our entire physical world is made of matter . Matter is anything that occupies space and has mass . . Physical and Chemical Changes. A physical change occurs when the substance changes state but does not change its chemical composition.