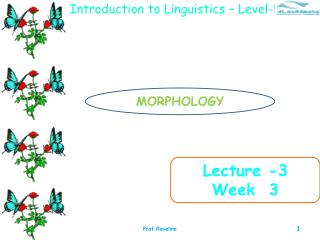 Introduction to Linguistics – Level-5. MORPHOLOGY. Lecture -3 Week 3. Morphology. Morphology is a field of Linguistics focused on the study of the forms and formation of words in a language . Lecture 3-3 - . summarizing ｒ relationships among variables. topics covered in this lecture note. we will cover several

Week 3 - . check-in : survey. now you have survey results from ~20 people stand up as a team and share interesting

Week 3 - . logic will get you from a to b. imagination will take you everywhere. albert einstein. digital logic.