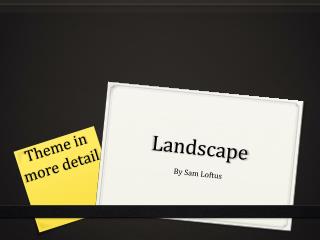 Landscape. Theme in more detail. By Sam Loftus. reason. I like the theme of landscape as it’s a very varied area, but is mainly natural as it’s the wide open plains with give a bigger view of the world as there is no limit to give the perfect image but takes time to get the perfect lighting. Landscape - . what is the name of the kind of trees in this picture?. birch tree landscape. background middleground

Landscape - . what is the main idea? what details are needed in your painting?. what does your animal habitat look like?

Landscape Tucson | ARTISTIC LANDSCAPE ARCHITECTURE - For a creative landscape in tucson, it's hard to determine what its

Landscape Design - Landscape design is not an easy task. before designing, there are various things to be planned. the

25 Magnificent Landscape Photography - Landscape photography brings the environment close to us. the natural scenary is