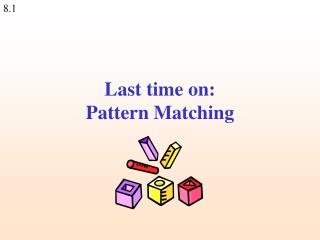 Ch 03 The Matching Concept and the Adjusting Process - . 1. the matching concept 2. nature of the adjusting process 3.

What Is Frequent Pattern Analysis? - . frequent pattern : a pattern (a set of items, subsequences, substructures, etc.)

Semi-Numerical String Matching - . semi-numerical string matching. all the methods we’ve seen so far have been based on