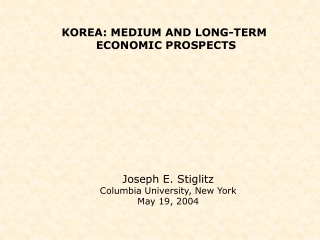 KOREA: MEDIUM AND LONG-TERM ECONOMIC PROSPECTS. Joseph E. Stiglitz Columbia University, New York May 19, 2004. Economic Performance Since 1997. Impressive and fast recovery. GDP grew at an average of 7% per year during 1998-2003 The Short Term - . we have seen in the long run that the us economy has had an upward trend of economic activity in terms

A Loose Fit: India and the BRIICS Ulrich Bartsch - . themes. not an optimal currency area: economic cycles in india and

Korea-Bulgaria Economic Relations in the Context of a Korea-EU FTA - . 3 may 2007 heungchong kim. head, european studies