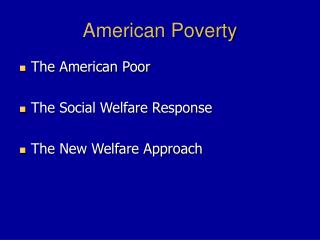 Unit 4 American Dream - . before reading. warm-up question? what is the american dream in your opinion? in what ways can

Poverty at the Crossroads - . john stapleton january 18, 2011 london, ontario . contents. living in the age of alpha

Poverty And Homelessness - . what is poverty?. poverty is the lack of essential items needed to support the basic needs

Characteristics of the American Dream - . the land of opportunity was available to all. the american dream. the american