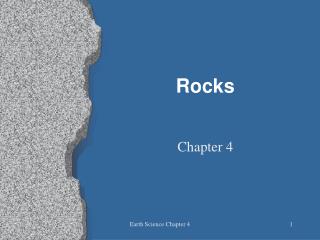 Rocks. Chapter 4. Rock. Material that makes up solid parts of Earth Can be made of one or more minerals Solid organic matter Noncrystalline matter, such as glass. Rock-forming minerals. About twenty minerals that make up most rocks on Earth’s crust. Granite.

ROCKS AND MINERALS - . unit one. warm-up #1. a mineral is inorganic, which means that it contains. answer. no materials

Sedimentary Rocks - Weathering. the sediments that make up sedimentary rocks are produced by:.