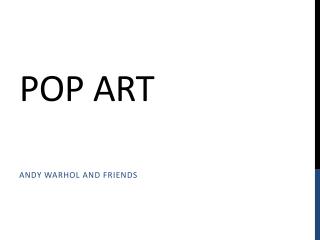 POp Art - . richard hamilton. hamilton, just what is it that makes today’s home so different, so appealing ?,1956. andy

Pop art - . by brenda orozco. what is pop art?. pop art is a art movement where artists focused on familiar objects most

POP ART! - . pop art is a visual artistic movement that emerged in the mid 1950s in britain and the united states . pop

Pop Art - . an art movement and style that had its origins in england in the 1950s and made its way to the united states

Pop Art - . an art movement started in the 1950’s it challenged the traditional fine art by incorporating images seen

Pop Art - . late 1950’s—60’s. pop art started in england after wwii the us really made it popular pop art stands

POP ART - . form. form refers to an element of art that is three-dimensional ( height, width , and depth) and encloses