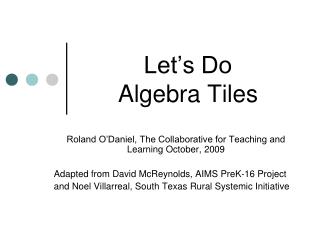 Alge-Tiles - . making the connection between the concrete ↔ symbolic (alge-tiles) ↔ (algebraic). what are

Tiles - . by: ashley, thomas, nick ,cole . 1.how to lay out reference lines for floor tiles

Solving Equations with Algebra Tiles: The basics - . for the equations we will solve, we will use 2 types of algebra

Algebra Rap - . by val and cont. algebra. algebra is easy it’s just a math game. constant. a constant is steady- it

Why You Should Go for Tiles Instead of Marble and Granite - Buy bathroom tiles online at the lowest prices in india.