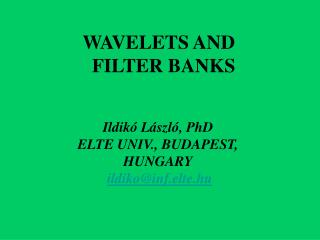 Final Review - . review. the very basic wireless communication system the bits are sent to the low pass filter to be

Branch Banking - . unit vs. branch banking. most countries have only a few large banks, each banks with many branches

Chapter 7 Wavelets and Multiresolution Processing - . an example. the welch periodogram of this speech signal. stationary

An Introduction to adaptive filtering &amp; it’s applications - . by asst.prof.dr.thamer m.jamel department of

Chapter Thirteen - . introduction. the u.s. has about 6,800 commercial banks and roughly 16,000 depository institutions.