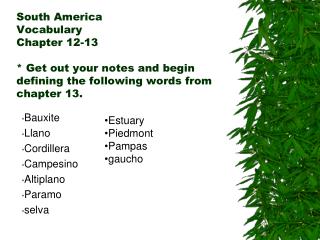 Bauxite - Where is bauxite found?. bauxite is a rock which is naturally formed and later mined from the ground

Western Cordillera - . by: alden cheung by: mathusan srimurugan the cordillera region has a mountain belt that stretches

Will Selva - This is will selva's powerpoint presentation about his sports website. on will's sports site, you will find