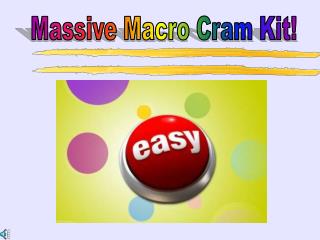 MACRO - . an overview of all systematic theology. part 8: doctrine of salvation 3 false views of salvation liberalism -

MACRO - . an overview of all systematic theology. part 3: doctrine of revelation divine revelation - the one, true god

Macro - . a fragment of code which has been given a name. whenever the name is used, it is replaced by the contents of

Final Exam Cram Session - . final exam procedures: you will work in pairs. you will be able to participate in a dialogue

Macro - . measures and policies. here are the tools used to evaluate government performance in the popular discussion:

Cram Session - . by tj chukwueke. 1 . you are given: fund x accumulates at an interest rate of 8% compounded quarterly

The General “cram” Class - . follow the instructions on the next slide. study! and ask questions! (there is no such