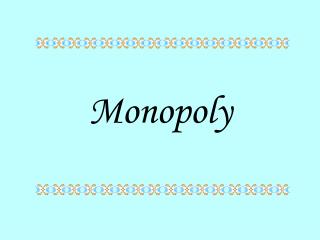 Monopoly. What is monopoly?. It is a situation in which there is one seller of a product for which there are no good substitutes. Why do monopolies exist?. Economies of scale – costs are lowest when one firm supplies all the product (Natural Monopoly) The State - . origin, transformation, and collapse. i. defining the state. definition based on politics: community or

Dominant Firm with a Competitive Fringe - . this supplement answers the last question of topic 3, namely:what happens to

Chapter 10 - . identifying markets and market structures. economic principles. the use of cross elasticity to define

C hapter 10 - . identifying markets and market structures. economic principles. the use of cross elasticity to define