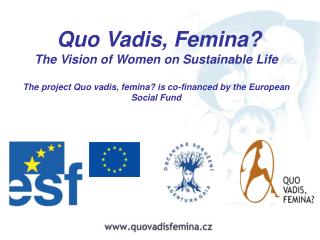 Quo Vadis, Femina? The Vision of Women on Sustainable Life The project Quo vadis, femina? is co-financed by the European Social Fund. The Quo Vadis, Femina? project goal is. To develop women’s vision on sustainable life… To identify unresolved issues and stereotypes GOAL 1 - . to provide clinicians and public health officials with the following information related to ricin:. background

Status of the Run IIb CDF Detector Upgrade Project - . ted liu fermilab. 2b or not 2b  this is no longer the question.