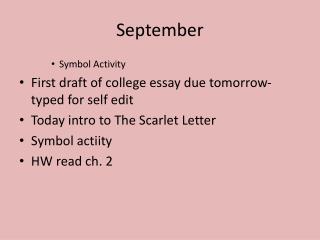 September. Symbol Activity First draft of college essay due tomorrow- typed for self edit Today intro to The Scarlet Letter Symbol actiity HW read ch. 2. A preview. http://www.youtube.com/watch?v=NR3BVN8ofk8. The Dude. Why do we care?. September - . abby oyer. mentor. i collaborated with my mentor by telling her about my project and how i want to run my

September 2.001 - . engineering ethernet based solutions. by the software support team (gtd st.genis) and the cryogenics

September Journal - . 2 general observations special assignment: “sit and listen” choose a day when you will not mind