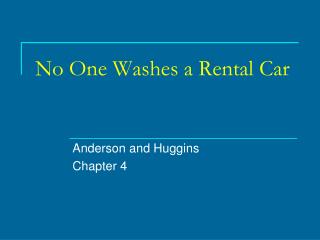 No One Washes a Rental Car. Anderson and Huggins Chapter 4. Analogy: Ownership Matters. The rental car company is quick to wash, wax, and polish its cars. The owner of the car, by maintaining it, captures a return in the rental and resale market. We don’t because we don’t own them. Friction Vs. Touchless Car Washes - There are a number of different options available for automatic vehicle cleaning. for

Car rental- Mistakes One Should Avoid - Car rental is an easier approach in comparison to a car purchase. today, people

Car Rental Software Under One Roof - Want to increase your business profitability? here is the chance to simplify the

Lahore Car Rental – Car Rental Lahore – Rent a Car Lahore: - Are you looking for rent a car lahore? we are providing

CAR WASHES: SAFER THAN EVER BEFORE - Car washing can be beneficial and relaxing as well. but as we engage in the

Rental Car - Comparison from 80,000 vehicles for rental and lease with best monthly rent a car and cheap car hire deals

Car Rental - However, there are various other times when we ought to truly provide renting a vehicle a lot more thought.