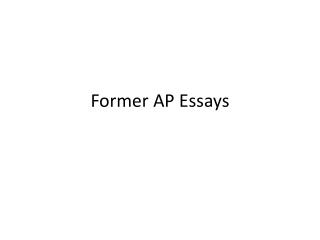 AP ESSAYS - . united states government. the constitution was an attempt to address problems of decentralization under the

AP English Literature Essays - . must do’s must don’ts. the essay’s purpose. the essay is intended to demonstrate

AP Literature Introduction to the AP Exam Essays - . k. matteson rocks the house. 2011 exam. what is the purpose of the

How to Approach AP Lit. Essays - . prose/ poetry essay. work the prompt: be sure you clearly understand what the prompt

Thesis Statements for AP Language Essays - . a thesis statement:. tells the reader how you will interpret the

Writing essays for AP United States History - . tips, tricks, advice and warnings. writing a good essay is a lot like