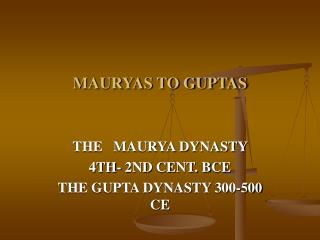 10/17 Focus The Mauryas and Guptas created powerful empires that united most of India. - 10/17 focus the mauryas

India after the Guptas - . everybody plays!. a split developed among the followers of ________ in india. a the teachings

India After the Guptas - . chapter 8-4. the impact of religion. for hundreds of years buddhism was the accepted religion

Adhering to the Rules at the Guptas - Gupta brothers with female employees have been excellent as an employer. a lot of

The Golden Age of the Guptas - . essential question who were the guptas, and when did they rule india? the gupta empire

Ancient Indian Coins of Gandhara, Magadha-Maurya, Guptas and Kalachuri - Get a quick overview about four ancient coins of

To hear is to forget; To see is to remember; To do is to know! - . %. everything you have heard from lectures you’ll

To Educate to SOLIDARITY - Municipality of vedano al lambro. to educate to solidarity. info on ,its purposes and its