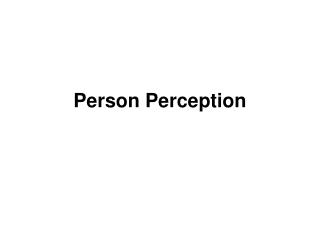 Lecture Sessions on Impression Formation (Person Perception) - . 1. what are the sources of information in forming

Journalism 614: Opinion and Perception I: Third-person effects - . concerns about the media. various categories of media

The Face and Person Perception: Insights from Social Cognition - . kimberly a. quinn and c. neil macrae. foundation of

The third-person perception as a self-preserving mechanism - Explaining tpps. the prevailing explanation is that the

Person to Person - . cuando ayudamos a otro, ambos nos fortalecemos. when one helps another, both gain in strength.

Perception: - . organization and interpretation. perception is…. our way of selecting, organizing, and interpreting

Perception - . done by: abdulaziz mohammed abulfatih class: 11s. the main ideas:. the relationship between what we

PERCEPTION - . cutting through the clutter. how many pages of the 750 are devoted to editorial?. answer: less than 100.

Perception - . perception. foundations of individual behaviour. “ we don’t see things as they are, we

Perception - . other senses reviewed. lab day review- hand in please hand in your blog assessment  i will be