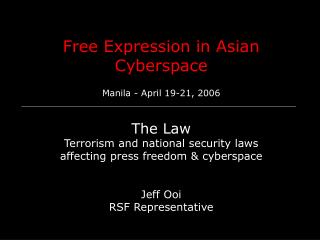 Security in Cyberspace - Torbjörn lundqvist. security in cyberspace. overview. written on the body: biometrics and

Law and Terrorism - . “the laws will thus not be silent in time of war, but they will speak with a somewhat different

National Security in Cyberspace: It Takes a Nation - . sandra stanar-johnson nsa/css representative to the department of

IS3350 Security Issues in Legal Context Unit 8 Cyberspace and the Law - . learning objectives. describe the role of

LAWS AFFECTING BUSINESS - . how to legally terminate an employee. terminating an employee has become a necessary part of

The future(s) of terrorism and Canadian national security - . preliminary research findings from a tsas-sponsored project