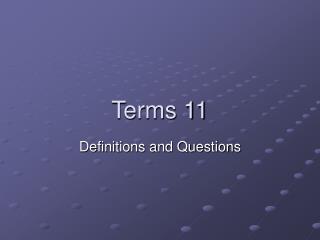 Terms for 11/14 - . social security act = provide security for older americans and unemployed workers. warm up. what

11 Important terms of BIM Software - Bim software refers to a 3d visualization of building design that includes a plan,

“Connecting Terms of the New Message” part 11 Terms for Our Day” - . ii timothy 2:7 consider what i say; and the