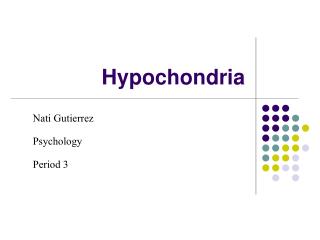 Hypochondria. Nati Gutierrez Psychology Period 3. Definition.  Hypochondria is a condition in which a person believes that he or she is ill without actually being ill. (worries about becoming ill that it affects his/her life). Somatoform Disorder. Hypochondria - . britani balderas per 3. the belief or fear of having a decease when he or she is just experimenting body