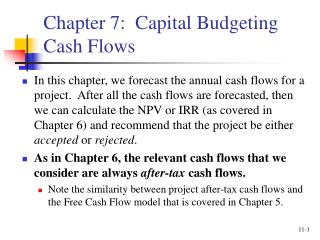 Chapter 7: Capital Budgeting Cash Flows. In this chapter, we forecast the annual cash flows for a project. After all the cash flows are forecasted, then we can calculate the NPV or IRR (as covered in Chapter 6) and recommend that the project be either accepted or rejected .

Budgeting - 21. budgeting. describe budgeting, its objective, and its impact on human behavior. 1. describe the basic

Chapter 4 The Time Value of Money - . chapter outline. 4.1 the timeline 4.2 the three rules of time travel 4.3 the power

CHAPTER TWENTY-FIVE - . statement of cash flows. purpose: to provide information about how cash was generated and used

Chapter 19 Financing and Valuation - . recall that there are three questions in corporate finance. the first regards what

Chapter 19 Financing and Valuation - . recall that there are three questions in corporate finance. the first regards what