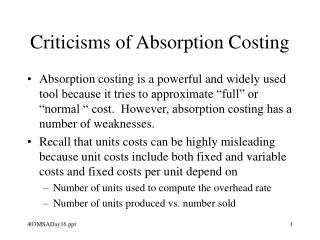 Absorption Costing - . miss hunter. introduction. every business has costs, those costs can be direct or indirect. direct

Absorption Costing and Activity Based Costing - 2. methods of costing. the cost of a unit of production = variable

Absorption Costing and GAAP - . variable costing a.k.a. direct costing fixed mfg o/h is a period cost focus is on

Overheads and absorption costing - . overheads. overhead is the cost incurred in the course of making a product,

Absorption and marginal costing - . introduction. before we allocate all manufacturing costs to products regardless of

Criticisms of Hume - . classification of virtues. yesterday we looked at hume’s two types of virtue (utility and

Criticisms of Stewardship - . lesson aims. to show that stewardship is not universally accepted as a good basis for

Criticisms of Kant - . what makes an act moral?. a major difficulty for kant’s theory is that it seems that not every