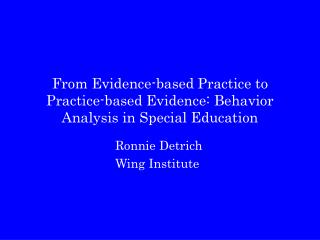 Evidence -Based Practice - . a new approach of teaching the practice of management. eric barends, cebma – denise

Evidence Based Treatment of Amblyopia in 2005 - . what we have learnt from the pediatric eye disease investigator group

EVIDENCE BASED MEDICINE A new approach to clinical care and research - . objectives of the session. recognize the

Evidence Based Medicine in the office and hospital - . daniel j. van durme, md professor and chair dept. of family

An analysis of the evidence for the existence of HIV - . eleni papadopulos-eleopulos evidence in chief in the supreme